Skip to content
An email exchange started with a questionable joke, but it led to concerns over the independence of some aged-care advocates.

As jokes go, it was a bad one.

The reference was unmistakable. In 2000, a Victoria nursing home was caught bathing elderly people in water laced with kerosene, an archaic method of treating scabies. The kerosene caused skin to blister, and rashes erupted over many residents’ bodies. The episode attracted intense media attention and tarnished Bishop’s political career. It also damaged the relationship between the then minister, the Department of Health and Aged Care (as it was then called) and the Aged Care Standards and Accreditation Agency, the body that oversaw conditions in aged care facilities.

The email, made public today for the first time, elicited responses from many people considered leaders of Australia’s aged-care industry – people usually known for speaking up on behalf of the frail and elderly.

While some may say the email exchange amounts to little more than banter among colleagues, experts and advocates told The Global Mail they see it as illustrative of a deeper problem of mixed interests and cosy relationships between the people at the top of the aged-care industry.

Lynda Saltarelli, head of the Melbourne-based advocacy group Aged Care Crisis, said she was “concerned by the tone and thrust of the comments”.

“What would the residents bathed in kerosene and their families have thought, had they known the way their misfortune is perceived by industry leaders?” she asked.

Following the kerosene comment, several leaders in the aged-care industry chimed in to the email chain, with comments that they would down a South Australian red, or a celebratory sake. None of the emailed comments seen by The Global Mail explicitly questioned the appropriateness of the joke.

One reply came from Ian Yates, chief executive of the Council on the Ageing – known as COTA – one of Australia’s leading advocacy groups for people over the age of 50. “I shall certainly raise a glass or two of good red,” he wrote, “to celebrate what has become a very important national vehicle for aged-care reform.” Yates reminded the group that he had personally convinced his organisation to join the National Alliance, which he described as a, “provider, professional dominated body.”

That comment troubled experts and advocates interviewed by The Global Mail who said the comment suggested an “unhealthily cosy relationship” between consumer advocates and industry.

“There is a place for dialogue between providers and community groups intent on improving care, provided the community group maintains its independent focus and integrity, and has an independent, critical position,” Saltarelli said via email.

Yates’s role is especially significant because his group was handed a $410,000 contract in July 2011 to take charge of the government’s consultations with communities across the country about aged care reform. The meetings, which wrapped up in January 2012, varied in size from 40 to 200 attendees, says Yates. The views recorded at the meetings will inform how the government responds to a set of controversial proposals that would reshape aged-care funding in Australia. 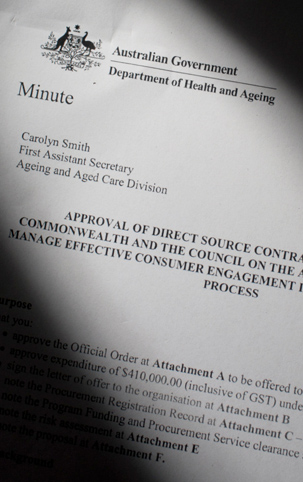 But the fact that government paid COTA to undertake the consultations on its behalf troubles some leaders in the aged care industry. John Ireland, recently retired chief executive of Southern Cross Care, a large not-for-profit aged care provider, questions the independence of a consultation process that is paid for by the government. “Whether it is fact or not, the outcome of those sorts of consultations can be seen to be tainted, because it’s funded by the government,” he says.

Of course, organisations in many fields receive funding to perform a large range of services. But Ireland says the particulars of this contract are troubling because the government has outsourced its consultations to a group that would ordinarily be doing the work independently.

“I don’t see that as being the role of the peak body, to take government funding to do its core job,” he says. “If you get money for training, that’s a different kettle of fish entirely. If you get money to present an information package, that’s different too, because it’s fact.”

Whether it is fact or not, the outcome of those sorts of consultations can be seen to be tainted, because it’s funded by the government

Yates disputes any suggestion that his organisation’s independence has been compromised, adding that through COTA’s engagement with industry, he has been able to shift the debate to focus more on consumer rights.

“The notion that we’re in the government’s pocket is a bit bemusing, when what we’re engaged in – in aged care – is a campaign to get the government to do something,” he says.

COTA has been instrumental in shaping some of the proposals that the government is currently considering, he says. The proposals would hand more freedom to the organisations that run aged-care facilities but would also, according to Yates, benefit consumers who would have aged-care entitlements better tailored to their needs. He says there’s nothing unusual about receiving government funding to undertake community consultations.

“COTA Australia, along with many other organisations, receives regular peak body funding from the Commonwealth for its role. And COTA has a strong record of being critical of the government when it needs to,” he says.

Indeed, COTA was not the only group paid to consult with the community. Alzheimer’s Australia also conducted community meetings, under a contract worth $80,000.

Yates says his group approached the government with the idea of the consultations because the organisation wanted to ensure consumers’ voices were heard. The contract was awarded without any public-tender process.

The department declined to make available the official who was responsible for overseeing the contract, but said in an emailed statement that COTA’s role allowed them to access “invaluable” information about community views. The no-bid contracting process complied with procurement guidelines, and COTA has not received any other contracts from the department during the past five years, according to the statement.

But the department’s reliance on a consumer group to gather community sentiment is indicative of a broader trend, according to Eva Cox, a public intellectual who is currently a research fellow at the University of Technology, Sydney.

Richard Gray, whose joke started the email chain, told The Global Mail that the comment was made in jest and was not intended “in any way shape or form to be offensive”.

Wed Aug 13 , 2014
The waste fibres from hemp crops can be transformed into high-performance energy storage devices, scientists say. They “cooked” cannabis bark into carbon nanosheets and built supercapacitors “on a par with or […]