Skip to content
After the poisoning of critically endangered grasslands by a company which he part-owned, Angus Taylor pushed to have the environment legislation reviewed. The review was chaired by Dr Wendy Craik, a regular reviewer for government. Jommy Tee and Ronni Salt investigate conflicts of interest.

Following an investigation into controversial land clearing by Jam Land Pty Ltd and representations made by part-owner, Angus Taylor, to then Environment Minister Josh Frydenberg to revisit the legislation, a review of how the Environment Protection and Biodiversity Conservation Act 1999 (EPBC Act) “intersected with the agricultural sector” was commissioned. Dr. Wendy Craik was hand-picked by the Federal Government to chair the review. The final report contained a recommendation (No. 21) that a $1 billion trust fund be set up to compensate farmers.

Should the $1 billion fund be approved, it would apply not only to the farms owned by Jam Land, but other Taylor-owned holdings and managed properties in the South Eastern Highlands.

Before we examine whether the review was “independent” as claimed, let’s roll out the chronology of events of the scandal known as #Grassgate which led to the push for the EPBC review. Summaries can also be found here and here.

If the recommendations of the Review are adopted, farmers like Angus and brother Richard Taylor may be financially compensated thanks to a $1 billion trust fund to “compensate landholders affected by the influx of a mobile threatened species into an area causing significant financial burden.” 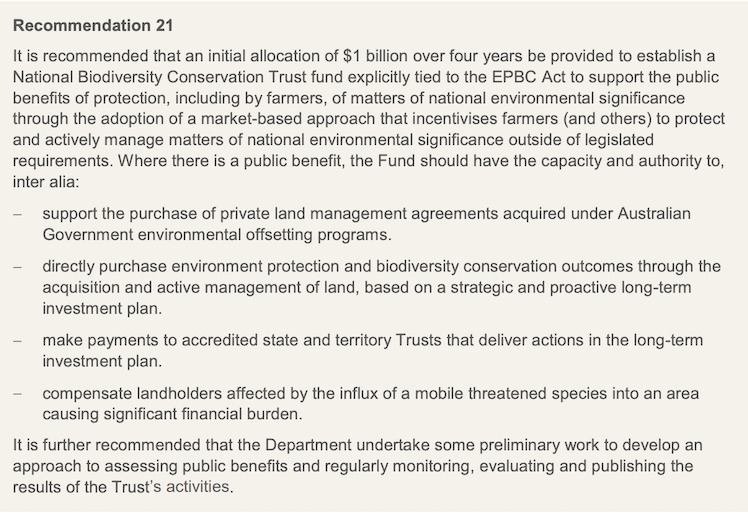 How independent was the EPBC review?

The Final Report of the ‘Review of Interaction Between the EPBC Act and the Agriculture Sector’ was released twelve months ago. However,  concerns about its “independence” have only just come to light. While in no way impugning the professional reputation of Dr Wendy Craik, the list of examples below of non-disclosures and serious conflicts of interest is nevertheless of concern.

Wendy Craik is also a senior associate of Aither — a consulting firm that won a government tender in April 2018 to provide the independent review Craik was conducting. At a Senate Committee hearing on August 23, 2019, Craik claimed that her firm Aither was approached first by the Government and that she only came onboard afterwards to head the EPBC review. But her appointment was announced March 29, 2018, several weeks before the tender was awarded to Aither.

It would be highly unusual for ministers to approach a consulting firm to conduct a review before awarding the tender and then ask the consulting firm to nominate a chair. Indeed, promising a contract to a firm before it went to government tender could possibly be a breach of procurement rules.

Leaving aside the question of what came the first, the chicken or the egg, we appear to have been left a very scrambled dish of compromise underpinning the entire review. Remembering this was promoted by the government as an “independent review”, it’s somewhat surprising to find that since 2015, Wendy Craik has been and remains a director of the Australian Farm Institute (AFI).

The AFI is sponsored by a coterie of vested farming interests such as NSW Farmers (platinum sponsor), Grain Growers Limited (gold sponsor), Queensland Farmers’ Federation and the Victorian Farmers Federation (both silver sponsors). Indeed, an examination of the AFI’s constitution reveals that the founding member of the AFI was, in fact, NSW Farmers’ Association.

When questioned in Parliament on July 29 this year whether he’d received a single letter from any constituent prior to his meeting with Minister Frydenberg, Angus Taylor claimed he’d called on NSW Farmers on 21 February 2017 – at the behest of an unnamed farmer from Yass – and received a briefing from them on the listing of temperate grasslands under the EPBC Act.

The communication with NSW Farmers occurred at approximately the same time Taylor was talking to Minister Frydenberg about the Department of Environment compliance action involving Jam Lands. The AFI also has a Research Advisory Council. One of its members David Sackett, the managing director of Growth Farms — a company founded by Angus and Richard Taylor and still partially owned by them.

As it happens, the independent review chair (and director of AFI), Wendy Craik, sought and received submissions and/or held consultations with NSW Farmers, Queensland Farmers’ Federation, Victorian Farmers Federation, Grain Growers Limited, and Richard Taylor as part of the “independent review”. The review also held consultations with the National Farmers Federation (NFF) — an organisation where Dr Craik was once Chief Executive .

It appears that not once throughout the process, either at the review’s conception, announcement, commencement and conduct, were the obvious conflicts of interest of the chair of the review ever raised.

At no time during the conduct of or subsequent to the review did the chair offer up the morsel that she was a serving member of the AFI — an organisation supported and funded by key contributors to the review. Rather gallingly, various tweets by the Aither, the AFI, and the NFF during and after the review make no secret of the fact that Craik was a Senior Associate of Aither; a board member of the AFI; and met with a full delegation of the NFF’s Sustainable Development Committee where the focus was the streamlining of native vegetation legislation.

The tweet by the NFF was liked by none other Minister David Littleproud — the joint instigator of the independent review.

If anything, the actions and social media activity of the participants (including the chair) demonstrate a set of biases working against an independent assessment of the EPBC Act and intersection with the agricultural sector.

Additional examples of bias were revealed during the Senate Committee hearing on August 23, 2019, when the Committee heard no less than nine Department of Environment officials visited the Monaro region to discuss the EPBC review. The entourage included the Deputy Secretary, First Assistant Secretary, an Assistant Secretary and the departmental official in charge of compliance.

This extraordinary level of departmental representation in both numbers and seniority was only given to the Monaro region and its farmers, including Richard Taylor, and was never extended to any other party to the review. It could be argued that the failure to adhere to common probity practices severely compromises the review.

There also appear to be other non-disclosures and potential serious conflicts of interests. These relate to a property that owned by Wendy Craik. The property is located between Canberra and Yass and sits within the boundaries of the temperate grassland listed under the EPBC Act. It is not clear if the Commonwealth’s overlay specifically impacts on Craik’s property. Craik was unavailable to respond to questions from this publication. However, what can conclusively be said is Craik’s land contains an overlay of “vulnerable regulated land” as per NSW legislation, the Land Management (Native Vegetation) Code 2018. According to the NSW code, vulnerable regulated land is land where clearing of native vegetation may not be permitted.

Given the review came about after extensive lobbying by Angus Taylor, it is important to establish if there were any prior interactions between the independent chair of the review and the person pushing hardest — Angus Taylor. As it turns out, there was a significant interaction in 2008 relating to a $1.8 million environmental water buyback.

Within a fortnight of the purchase, EAA and EAI were approached by then Murray Darling Basin Commission (MDBC) to buy an allocation of their water to the value of $1.8 million. The chief executive officer of the MDBC at the time was Wendy Craik. The history of that transaction demonstrates there were furtive negotiations to complete the deal, thus enabling the purchased water to be released to flow through to the environmentally-stressed Narran Lakes.

An official evaluation of the transaction reveals that initial negotiations were firstly conducted with the local farm manager. EAA’s 2008 annual report to ASIC reveals that Hamish McIntyre was the farm manager at the time. As previously revealed, McIntyre is the current chair of Cotton Australia, a former director of EAA, is well-known to the directors of the Cayman-based parent company and one of Barnaby Joyce’s long-term associates. As farm manager, McIntyre, however, needed the approval of his international board of Cayman directors who were urgently contacted in April to approve the deal and get the contract signed.

When Wendy Craik was interviewed on ABC radio on March 25, 2008 about the deal, she claimed “it’s a commercial-in-confidence deal, so we are not disclosing from whom we purchased”.

To this day, that contract and the signatories to the contract have never been publicly revealed. It makes the most recent statement by the Department of Agriculture and Water Resources (DAWR) that “due diligence was followed” very hard to swallow, especially if in 2008, the negotiation occurred with the international board of EAA’s parent company. It stretches credulity to believe that DAWR did not know that the ultimate parent of EAA was a Cayman-based company. What is clear is that the Government’s appointment of Dr Wendy Craik to chair the EPBC Act review has contributed once more to the erosion of public trust in government processes.

Editor’s Note: Dr Wendy Craik was asked if she would like to comment/respond to the above non-disclosures and conflicts of interest. We have received no response at this stage.

Tue Sep 24 , 2019
On Friday, more than 300,000 of rallied behind an unprecedented call for climate justice.1 Some of the youngest leaders in the country stood shoulder-to-shoulder with the custodians of the oldest continuing […]