by admin | October 21, 2019 | Australia's move to the Right, Political issues, The PM and the QAnon conspiracy | 0 comments 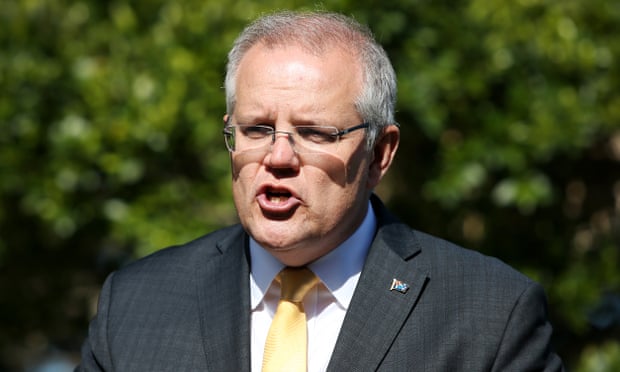 The theories aired have been ‘extraordinary and bizarre’, says Penny Wong

The prime minister’s department has revealed that a staff member who is working at Scott Morrison’s official residence, and who Labor on Monday alleged in a Senate estimates hearing has links to a conspiracy theorist, is yet to receive a security clearance.

Under questioning by Labor senator Penny Wong in the hearing, the Department of Prime Minister and Cabinet’s first assistant secretary, Gerard Martin, revealed that a staff member employed at Kirribilli House on 12 August – on the recommendation of the prime minister’s office – had received a police clearance but was awaiting a security clearance at a “negative vetting” level 2.

That level of clearance permits access to classified information and resources up to and including “top secret”.

Wong asked the department if it wanted to respond to the allegation that a conspiracy theorist who tweets under the handle @BurnedSpy34 was a friend of Morrison, with his wife a member of the prime minister’s staff.

She said the conspiracies aired by the theorist were “extraordinary and bizarre”.

The finance minister, Mathias Cormann, intervened, saying the question would be taken on notice.

“I am not aware of either the circumstances you describe or what is asserted in that particular story,” Cormann said. “I would be disappointed if your suggestion is that a wife couldn’t be appropriately employed because of what may or may not be the activities of her husband, if indeed the activities are accurately reported.

“You are now going to allegations about a family member … of a staff member which I think goes beyond what I am comfortable dealing with on the spot without properly informing myself of the facts.”

Stephanie Foster, an assistant secretary of the department, said a colleague had made her aware of the alleged links to the QAnon conspiracy, but the department had not taken any action.

“We would expect any action, if any action was necessary, would come through either a police check or a security check,” Foster said.

The department said that the staff were employed by the department on the recommendation of the prime minister’s office because the workload at Kirribilli House required two additional staff following the change of prime minister.

There was no formal advertising process for the positions, and one of the additional household attendants was employed on 12 August after the house manager decided the proposed employee was “fit for purpose”.

As reported by the Guardian, the QAnon conspiracy variously claims that Donald Trump is leading a behind-the-scenes fight against a shadowy deep state, that powerful forces are hiding and protecting satanic paedophile rings, and that a secretive individual named Q leaves clues for his followers to decipher on internet forums.

The staff member is employed under the Members of Parliament (Staff) Act 1984, meaning the position did not need to be advertised and is tied directly to the relevant minister.